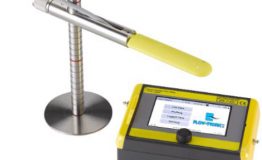 The PELICAN electromagnetic water velocity meter is a portable device that measures the velocity of water to determine its flow. The user interface for the PELICAN has been designed to be as simple as possible enabling users to quickly and effectively take accurate velocity measurements. The unit’s IP67 rating and sturdy build means that the PELICAN can be used in harsh environments, with the added feature of the waterproof encoder allowing easy navigation even with gloves on.

The PELICAN can be tailored to the user’s ideal setup, meaning the units, date and time, language and data logging methods are easily changeable.

Its hydrodynamic shape and small size probe permit measurements close to fluid surface and channel bed or pipeline wall, and with no moving parts it does not retain debris, guaranteeing accuracy and reliability.

Another feature of the PELICAN is the ability to profile rivers. If depth data is entered by the user, the unit is capable of generating a computed river flow profile, allowing more detailed analysis of the river. The PELICAN allows users to not only transfer data to a computer but also to analyze on the fly. The unit is capable of storing collected data, which can then be reviewed on-site.